Notes: Ladas Powell joined the WAAC underage. She served at Stonar Camp, near Sandwich, Kent. Ladas, or Gladys as she was known in the WAAC, kept an album with photographs and documents in it as well as entries by friends and colleagues. 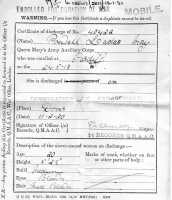 Certificate of discharge from the QMAAC on Termination of Engagement, 20.2.1920 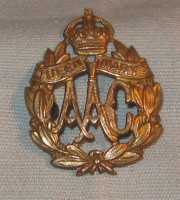 Notes: Gladys was a war widow aged 28. Her husband had been killed in July 1916. She had two small children. Her father was granted 2s a week for the upkeep of each child; the children also benefited from their father’s military pension.

Gladys’s photograph was collected by the Women’s Subcommittee of the Imperial War Museum as part of its collection of women who died during the War.

Letter to the Secretary of the women’s collection from Gladys’s sister, Mrs Summerfield. 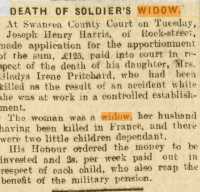 Report of maintenance grant to Gladys’s father, Joseph Harris, for the upkeep of her children. Weekly Argus 11th November 1916.rn

Notes: May, born 1891, was the fourth daughter of a farm labourer and his wife. She followed two of her sisters into domestic service in Rochdale. She began munitions work late in 1916, but soon became ill with ‘toxic jaundice’ and died at her sister Margaret’s home in Rochdale. She was also sister of Nellie Prosser [qv].

Name of May Prosser on memorial, Christchurch, Govilon

Name of May Prosser on Govilon War Memorial

Place of birth: Isle of Man 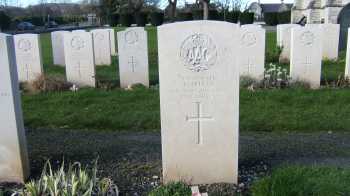 War Grave of Doris Quane, QMAAC, surrounded by the graves of Canadian soldiers

Notes: seems to have served and survived

Notes: seems to have served and survived

Notes: aged 47. SS Osmanieh was sunk by a German mine off Alexandria, Egypt. Grave in Hadra War Memorial Cemetery, Alexandria, Egypt. Born in the Workhouse in Dolgellau, she spent many years in Australia before returning to Britain to join the QAIMNS Reserves.

Notes: aged 30. She died when His Majesty’s Hospital Ship “Salta” was sunk off Le Havre on 10 April 1917. She was lost at sea and her body was never recovered. Her name appears on the Salta Memorial at Ste Marie Cemetery, Le Havre, Normandy, France, and on the memorial plaques in the porch of St Cadfan's Church, Tywyn

Name of Jane Roberts in the memorial porch, Tywyn Church