Notes: Nothing is currently known of Jane E Jones. 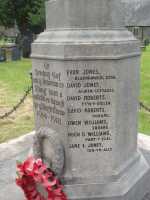 Notes: Nothing is known of Eunice Thomas, whose name appears on the Roll of Honour in Mynydd Bach Chapel, Swansea (60) 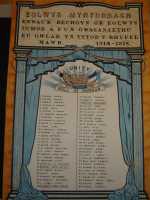 Record of the war service of Eunice Thomas, on the Roll of Honour of Mynydd Bach chapel, Swansea

Notes: Nothing is known of Nellie Jones, whose name appears on the Roll of Honour in Armenia Chapel, Caergybi. Sister of Maggie Jones. 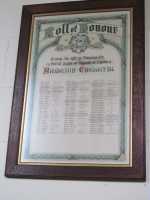 Notes: Nothing is known of Maggie Jones, whose name appears on the Roll of Honour in Armenia Chapel, Caergybi. Sister of Nellie Jones

Record of the war service of Maggie Jones, on the Roll of Honour of Armenia Chapel Holyhead

Notes: Miss Williams, also referred to in press reports as Mrs Fisher, sat at the base of the Abertillery War Memorial during its dedication on 1st December 1926. She was wearing the medals of her three soldier brothers who had been killed in France.

Notes: The Welsh Book of Remembrance was created as a Roll of Honour to accompany the unveiling of the Welsh National War Memorial in Cathays Park, Cardiff, in 1928. It is an attempt to list all those ‘Men and Women of Welsh Blood or Parentage … Who Gave Their Lives in the War 1914 – 1918’. Before the opening of the Temple of Peace in 1938 the book was on display in the National Museum. A number of women are included: the stewardesses Hannah Owen and Louisa Parry who died when RMS Leinster was torpedoed in 1918; members of QMAAC Gertrude Dyer, Jean Roberts, Mary Elizabeth Smith and Lizzie Dora Stephens; and VADs Gladys Maud Jones, Gwynedd Llewellyn, Amy Curtis, Eva Davies, Margaret M Evans, Lilian Jones, Edith Tonkin, Jenny Williams and Frances Sprake Jones QAIMNS.rnIt is not clear why these particular women were chosen for inclusion. This site has the name of many women who could have been included. Additionally Gladys Maud Jones and Gwynedd Llewellyn, despite their names, had no recent connection with Wales.

The Welsh Book of Remembrance

The Welsh Book of Remembrance, containing names of 35,000 service men and women who died during the Great War.

Notes: Gladys Snell was arrested on 7th May 1919 for the infanticide of her illegitimate 21 month-old son Ieuan Ralph. He had been drowned. She was sent for trial from the magistrates’ court to the Assize Court in Swansea. The jury there could not agree, and she then appeared at the November Assizes, where Gladys, then 19, was found guilty of manslaughter rather than murder. She was sentenced to nine months imprisonment. A number of well-wishers across S Wales, including the Boy Scouts, contributed to a fund to pay for her defence. The full story appears on the front page of the Cambrian Daily News, 25th July 1919. 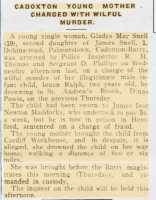 Report of the arrest of Gladys May Snell for infanticide. Barry Dock News 9th May 1919. 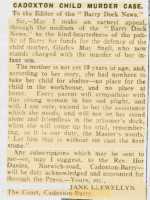 Notes: Katherine Drinkwater, born 1872, was a doctor’s daughter, and had her medical education in London and Liverpool (where she was one of the first women to receive the University’s Diploma of Public Heath). In 1903 she married a GP, widower Dr Harry Drinkwater, and moved to Wrexham. There she became an assistant school medical officer, and also held a position as Assistant Gynaecologist at the Women’s Hospital, Liverpool. In 1916 the Royal Army Medical Corps called for women doctors to volunteer for service in Malta, and Katherine was one of the first group of 22 to go. Life as a woman doctor with the RAMC was not easy. In a letter to the Times in 1918, Dr Jane Walker, President of the Women’s Medical Federation wrote “Although many of the medical women serving in the army not only have a high professional standing in civil practice, but now have a large experience in military hospitals, they rank below the latest joined R.A.M.C. subaltern, and are obliged to take orders from him. When they travel, they travel not as officers, but as ‘soldiers’ wives’”. Katherine had charge of the Military Families Hospital in the Auberge d’Aragon in Valletta, and remained there a year. In 1918 she was awarded the OBE for her work. After her return she continued to work in public health, became a JP, and continued with her husband to win prizes for their West Highland terriers in North Wales shows.

Katherine had charge of this Military Families Hospital in the former Auberge d’Aragon, in Valletta, Malta.

Notes: Born November 1865 and the daughter of a dockyard coppersmith, Emily Phipps worked her way from pupil teacher to headmistress of Swansea Municipal Girls’ School in 1895. She was an active feminist, boycotting the 1911 census with her partner Clara Neal (and three others, staying in a sea-cave overnight), was President of the National Union of Women Teachers 1915, 1916 and 1917, and was the editor of the Union journal. She promoted professional careers for girls, shocking some in March 1914 by suggesting that they could become dentists. Emily Phipps stood for Parliament, for Chelsea, in the 1918 election, one of only two women in Wales to stand. She later studied for the bar, and became a barrister in 1925. 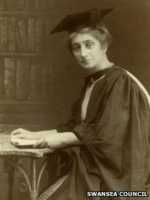 Place of birth: not known

Notes: Rose Owen was brought before the magistrates in Bridgend in August 1919 charged with performing an illegal operation on Elizabeth Williams, a widow. The case was drawn out, because Elizabeth Williams was seriously ill. However she recovered, and the case went to Cardiff Crown Court where Mrs Owen was sentenced to 18 months hard labour. She seems to have been a professional abortionist, as ‘women from the valleys and from Cardiff’ had been seen entering her house, as well as single girls who stayed there.

Part of the report of Rose Owen’s appearance before the Bridgend magistrates. Glamorgan Gazette 8th August 1919