War Memorials and Rolls of Honour 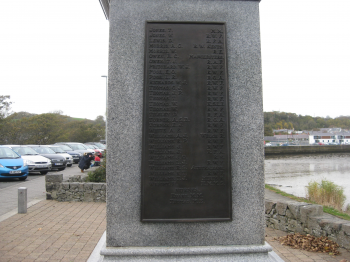 Impressive Cenotaphs and silent statues commemorate the thousands upon thousands of First and Second World War dead in our cities, towns and villages in Wales. In most cases they record the names of men killed in battles at sea, on land and in the air and the interminable lists invariably make sombre reading. During the past few years, to ‘celebrate’ the centenary of the First World War professional and amateur historians have sought to identify these soldiers, sailors and airmen and to give their stories greater meaning and worth.

Unexpectedly, when undertaking this project on Women during the First World War: the Welsh Experience, we discovered that some women’s names are also recorded on these memorials. The largest number appear on the Swansea Cenotaph where at least ten of the twelve munitions workers recorded are women, while the individual names of nurses, stewardesses and women in the services are found on local memorials the length and breadth of Wales. As in the case of the men commemorated most of the women came from ordinary backgrounds, and the fact that their names appear at all on such hallowed memorials is remarkable indeed. Researching these women’s histories and learning more about their contributions to the war effort can be a challenging task. The quest has led us to seek out war graves in local cemeteries and to research local newspapers, but much remains to be done. The grave of 25 year old Ethel Thomas in Dan-y-graig Cemetery, Swansea, for example, notes that she died ‘on active service’ in Mesopotamia and quotes, ironically, the Biblical refrain, ‘Greater love hath no man than this, that a man lay down his life for his friends’, but there is no other record of her war service.
Women are also recorded on the Rolls of Honour which adorn the walls of churches, chapels, memorial halls and schools, commemorating not only those who died in the conflict, but also those who served. Undoubtedly the longest such list can be seen in City Hall, Cardiff, where the names of those who made the supreme sacrifice are highlighted in gold. On the other hand, Newport’s magnificent Roll of Honour book commemorates only the dead, for in it ‘are written the names of four Women and one thousand, five hundred and eleven men who, in the Great War, laid down their lives for their King and Country.’

Similar plaques are still coming to light and we are greatly indebted to Dr Gethin Matthews and his team in Swansea University for sharing their research into Rolls of Honour with us.
The research is on-going and if you have any information about women on war memorials or Rolls of Honour please contact this site.